May Miles Thomas has triumphed with One Life Stand. Beautifully composed, keenly scripted and framed in deep-focus black and white, the look is 35mm Vistavision and the story a perceptive study of the loneliness and dislocation of modern times.

It is embellished by a tremendous, fragile yet funny performance from Maureen Carr as a single mother (Trise) trying to help her 18-year-old son, John Paul, find a successful future while fending off her ex-husband Jackie (the ever-present and excellent Gary Lewis).

The wonderful crooked smile of Carr conveys all the confused sadness of a world of call centres and disintegrating relationships. Her silent reaction to an abused wife's cry for help over the cold telephone lines is a moment of shattering contemporary poignancy. May has delivered the find of the (Edinburgh) Festival. One Life Stand is a lyrical masterpiece.

There’s a wonderful atmosphere in May Miles Thomas’s debut feature film, One Life Stand. It is the story of a working mother (played to perfection by Maureen Carr) who supports her son’s lazy ambition to be a male model. When the son ends up working for an escort agency, a well of loneliness and self-disgust opens up in the mother.

The film is one of several striking neo-realist British ventures at the (Edinburgh) Festival. For guts, style and promise it should win the Michael Powell Award for best new British feature.

Having secured attention as a pioneering, low-budget digital feature, One Life Stand proves to be equally noteworthy for the sombre precision of its black and white camerawork and its mature handling of complex emotional issues. It establishes May Miles Thomas as a filmmaker of world class distinction.

The human element at the centre of the story is sharply enough drawn to have a universal appeal and the film has the potential to connect with European arthouse audiences and beyond.

Thomas uses her camera with restraint and edits with great fluidity to create a sense of pace and narrative momentum without moving the camera itself. She captures little moments of time and brings them to life with richly textured performances. Maureen Carr is outstanding as indomitable single mother Trise.

A poignant tale, told with gentle humour and considerable understatement, One Life Stand is filled with compassion and insight.

May Miles Thomas' powerful and evocative, low-budget film received a host of awards but was never given a proper run in the cinema.

Shot on DV in black and white, it achieves a moody, noirish look. By taking a stylised approach in their treatment of gritty issues, the filmmakers avoid social realist cliches.

They're helped by Maureen Carr's brave performance as the single mum with a dead end job trying to help her son but unintentionally pushing him into a career as a male escort.

Released by the producers, this is a handsomely presented package with deleted scenes and a documentary revealing what it takes to set up a micro-budget project like this.

Thomas takes full advantage of her digital medium, shooting within closed spaces where the digi-cam is free to capture the intimate dramas unfolding within the walls, and exploiting the clean digital image (emphasised by filming in crisp black and white) to illustrate the stark realities of modern life. But One Life Stand isn't just a showcase for cutting-edge technology.

It's a deeply human drama about a single mother and her troubled teenage son...This is no hysterical melodrama; there's a beautiful, understated, sombre quality as well as gentle humour at work in what is, essentially, Trise's story. So while Thomas works within a very British and Scottish tradition of exploring domestic life besieged by a less than caring modern society, One Life Stand never resorts to cliche. Instead, issues, themes and characters are handled in as clear-minded and precise a manner as the images are recorded by Thomas' use of digital technology.

Shooting with a camcorder and restoring one's faith in British indie cinema, writer-director May Miles Thomas makes an impressive debut with this piece of Scottish realism that crosses Ken Loach with Bill Forsyth, to amuse and dismay in equal measures.

As the single mum attempting to fund son John Kielty's modelling aspirations, Maureen Carr is simply superb, whether trying to coax a smile out of her ingrate offspring, deflect her amorous boss, or cope with the drunken disillusionment of the husband who abandoned her.

From Glasgow comes One Life Stand, a truly fresh and strange movie about ordinary people written, directed, digitally photographed, and edited by May Miles Thomas.

Sombrely shot in black-and-white, this micro-budgeted drama revolves around Maureen Carr's astonishingly intimate performance as a weary working-class divorcee struggling to prevent her vain teenage son from being exploited as a gigolo, even as she herself is sucked into enterprise culture as a phone-line tarot-reader.

The mesmerising sequence in which she returns home after being sexually abused by her boss/boyfriend, lies down on her son's bed, where she is strafed by an ornamental strobe, and then confronts him with his moral self-deception is charged with anguish. One Life Stand is a peal of hope for Scottish - and Anglocentric - cinema.

Among 'Contemporary Films from Britain' at (The Lincoln Centre) the stand-out is One Life Stand by May Miles Thomas, a major discovery from Glasgow.

powerful and affecting
The Skinny

In terms of small, personal, feature-length filmmaking, it doesn't get much smaller than this. Written, directed, shot and edited by music video director May Miles Thomas this Glaswegian drama is something special.

A very powerful and affecting film, addressing a myriad of themes, from communication breakdown to relationships and power, it's an original story that builds to a dark and disturbing climax. Visually striking and almost poetic in its construction, One Life Stand is an impressive achievement worth seeking out.

a very fine film
The Guardian

One Life Stand is the feature debut by May Miles Thomas, who not only wrote and directed, but shot the film and edited it herself at home on her PC. It’s an object lesson in telling a story cheaply and turning the visual rough edges to your advantage - but all that would just be production anecdote if not for the fact that this is a very fine film indeed.

Social realist art cinema? Yes, in the sense that it addresses everyday British life in all its banality and desperation, and that it has an artistic edge in Thomas’s stark, melancholy compositions. This tough, harrowing but often uncomfortably funny drama gives the slice-of-life genre a new surge of energy. The sense of enclosure, as the digital black-and-white photography explores cramped apartments, bedrooms and offices, creates an uneasy intimacy that brings the characters vibrantly alive: by the end of it we know every crease on Trise’s brow.

The acting is uniformly superb, and while the film is socially engaged, it doesn’t take the Ken Loach route of spelling things out for us. It’s a moot point whether our film and TV industry currently has room for a hard-boiled case like Thomas - but it should.

It's a sad state of affairs when such a brave and quintessentially British movie like May Miles Thomas' haunting One Life Stand gets kinder treatment at festivals abroad than in cinemas at home...

A black-and-white digital feature about a middle-aged woman in Glasgow who naively pushes her 18-year-old son into the male-escort racket, writer-director Thomas has created a harrowing and poignant film that could be the Scottish equivalent to Requiem for a Dream. In the lead, Maureen Carr contributes a performance as heartbreaking as Ellen Burstyn's in Darren Aronofsky's equally stylized film.

One of the most authentic and original evocations of life in modern Britain, the digitally shot One Life Stand is an involving, intimate drama set in Glasgow, about the complex emotional ties and conflicts between a mother and son. Trise, played with world-weary grace by Maureen Carr, is a major new discovery.

Cool, acutely observed and unsentimental, One Life Stand discreetly dissects the modern service culture of illusion and fantasy for sale, exposing the denial, emotional isolation and melancholy reality that underwrite it. Making her debut film, May Miles Thomas is a writer-director to watch.

Amid all the debate over DV vs. celluloid, especially in smaller industries, May Miles Thomas' One Life Stand emerges as a perfect example of craft transcending technical origins. Made as a no-budget, personal exercise by the Glaswegian filmer, drama about a devoted single mother and her uncaring teenage son announces a considerable talent in waiting.

Maureen Carr shines as Trise…Full of humorous and touching moments, and far from being the downbeat grunge it sounds, pic has a rarefied, slightly abstract quality, thanks to Miles Thomas' formal, fixed-camera style, fluid editing and pertinent use of close-ups. Bobby Henry's ethereal music is a fine complement to the images, and there isn't a weak link in the varied cast.

The digital production and exhibition processes behind One Life Stand are fascinating enough to fuel real debate on film's future, but they should in no way obscure the outstanding merit of the movie itself and the critical status it deserves right now.

Old-school virtues of scripting and performance are at the heart of this realistically framed narrative portrait of a fraught mother-son relationship, and of a mature woman determined to hang on to a sense of self-worth that seems under fire from all angles.

This subtly directed drama denies itself the cold comforts of miserabilism. Rather, the battered spirit so brilliantly embodied by Maureen Carr battles on. The images are austerely precise; the story has soul.

Among the best (at the Edinburgh Film Festival), One Life Stand, May Miles Thomas' self-financed, first ever British digital feature, is a wonderfully acted drama of ordinary lives struggling for respect in soul-destroying surroundings.

gets right under the skin
Indiewire

Just when you think you have got One Life Stand worked out, it twists and turns its way yet again to leave you wondering where you stand on sexual mores and social conventions.

May Miles Thomas' DV feature is an engaging, claustrophobic one, with a memorable performance from Maureen Carr as Trise. Starkly shot in black and white digital video, the anonymous Glasgow locations take on a more grim hue through the desperately unhappy characters who populate it. Winner of several BAFTA New Talent awards, One Life Stand is an impressive debut, with an Oedipal dynamic that gets right under the skin.

An intense, often moving exploration of thwarted sexuality and inter-generational mistrust, May Miles Thomas' film is anchored by Maureen Carr's powerful central performance as a single mother faced with some harsh truths about her beloved only son. The fact that Thomas wrote, directed, shot and edited One Life Stand shows the authorial control which new technology can allow. 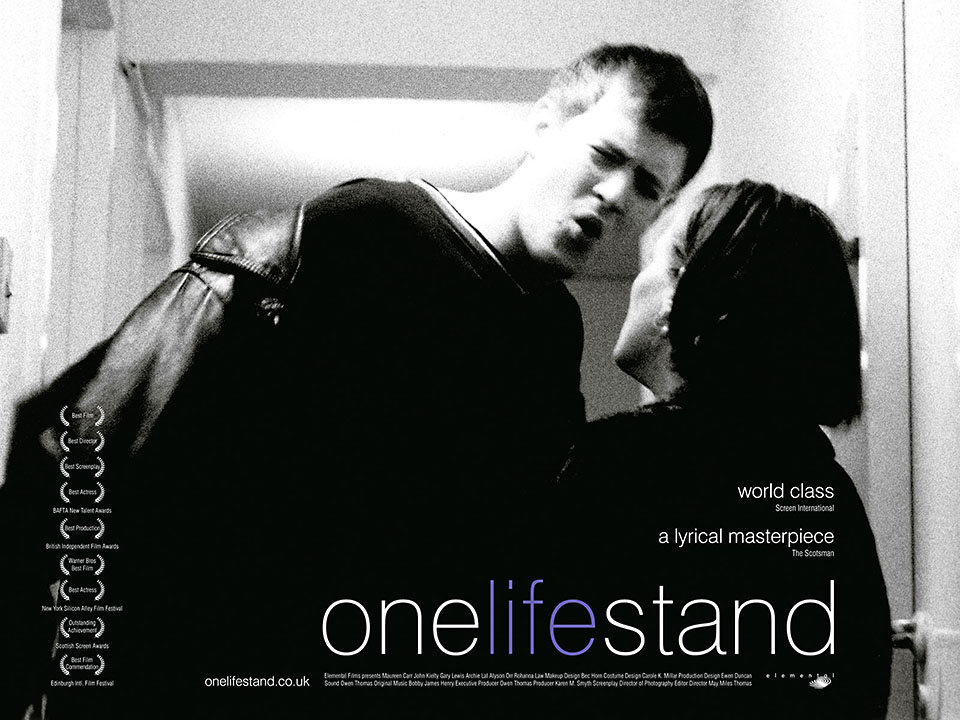